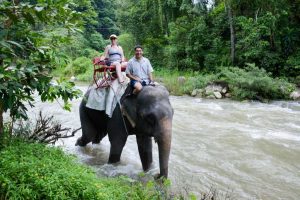 Thirty members of Scout Troop 175 left JFK Airport and flew to Phuket,Thailand. After 20 hours of flying they finally arrived at 4 AM local time and spent the rest of the day adjusting to the new time zone (11 hours ahead of Simsbury) and the heat and humidity. The next day they were up early and off to raft one of the local class 4 and 5 whitewater rivers. After donning wet suits and special life preservers they rafted twenty five rapids ending in a deep gorge. There they were picked up by a team of elephants and rode, two to an elephant, deep into the jungle to a series of waterfalls where they could swim and slide down the falls. “It was an exhausting day and very different than life in Simsbury” said Alex Stine, Senior Scout in the group. 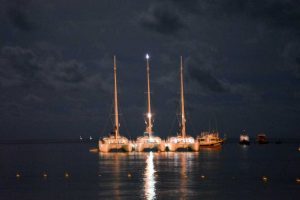 The next day the group was off to the port of Phuket where they boarded three Lagoon 45 Sailing Catamarans. Each boat can accommodate 10 people in cabins . The boats are totally self contained and are designed for ocean crossing. Each boat had a Thai Captain as required by law although the Scouts learned how to sail and navigate while on board. “We do a lot of sailing in our Troop because the skills of navigation and understanding how to move boats through the water using wind uses a lot of Scouting skills. ” said Brad Mead the Scoutmaster. The Scouts spent the next 9 days sailing through the Andaman Sea in the Indian ocean- traveling from island to island in some of the most beautiful cruising grounds in the world. Each day the boats would sail to a different island often stopping at coral reefs along the way to snorkel and fish. “The water is crystal clear , blue and warm and the snorkeling was tremendous” said Sean Vargas, Life Scout and asst Senior Patrol Leader. Each night the boats would anchor off of a small Thai village and often were able to go ashore  and have dinner at one of the local restaurants.
Most of the islands had spectacular beaches but one, Koh Phi Phi Leh was the famous island that was the centerpiece of the Leonardo DeCaprio movie The Beach – an idyllic lagoons surrounded by three thousand foot mountains. Others had resort hotels  and small supermarkets that the group could use for reprovisioning.The boats would all raft together each night to create a floating island. Often the Scouts would sleep out on the deck under the stars .
After nine days the boats returned to Phuket and after a farewell dinner on the beach at sunset the group flew home. 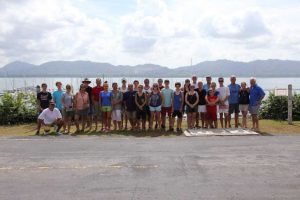 “We do these type of adventures every summer – this last year we explored Cuba in April and the islands of Greece last summer.said Scoutmaster Mead.  “We are scheduled to take our older Scouts to Honduras this next April during school break to become Open Water Scuba Certified and in July 2019 we are scheduled to climb Kilimanjaro in Tanzania – for the third time”.
Troop 175 meets Thursday nights at St. Mary’s Parish Center. For more information contact Brad Mead at bradmead@deltanow.com.
Troop Trips
1401
No tags