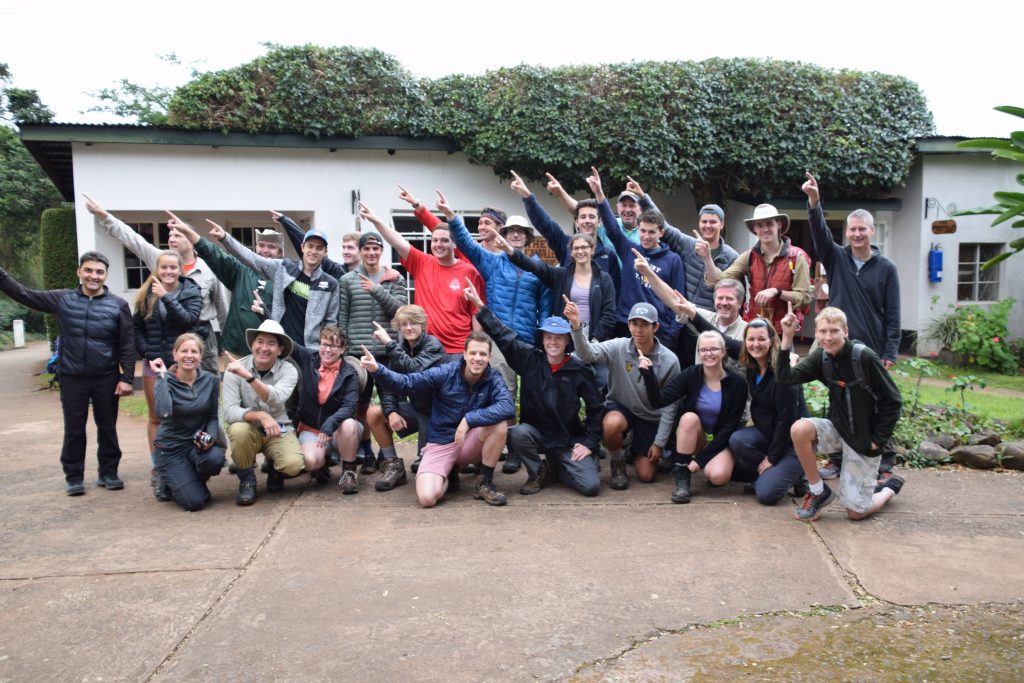 28 Scouts and parents left Simsbury on July 26 to fly to Africa to climb the highest mountain on the continent – Mt. Kilimanjaro in Tanzania. The trip was two years in planning and began with a non-stop flight from JFK to Nairobi, Kenya. There the group transferred to private buses to drive the six plus hours to the base of the mountain and the Marangu hotel – the oldest climbing outfitter in Tanzania. After two days of briefings and lectures on first aid, high altitude climbing and proper equipment use, the group was introduced to its Tanzanian Climb Support Group – 86 porters, guides and cooks that would move the two thousand pounds of gear up the mountain needed to support the climb.

The group took the Rongai trail, a little used trail that winds up the back side of Kilimanjaro going past Mawenzie, the second, older volcano paired with Kilimanjaro. For 5 days the group moved through five different climate zones created by the largest free standing mountain in the world. Beginning at about 5,000 ft altitude the group moved up to 15,500 ft at Kibo Assault Hut – adjusting to the altitude over the 5 days. Each day the group would climb for about 5-8 hours, developing their breathing to the ever declining oxygen content of the air. “This is a challenging environment” said Scoutmaster Brad Mead – the leader of the trip. “We were the first American Scout Troop to climb Kilimanjaro in 2007 and we did it again in 2012, but both times with groups about half the size of this year’s group. We were delighted this year to also have with us 3 girls from the first Scouts BSA Girls Troop to summit Kilimanjaro, Troop 1175.”

On Summit day, the group was awakened at 11 PM and after a small meal of biscuits and tea, 14 guides each took two climbers and began the climb up the crater wall – a 4,000 ft vertical climb. The night was perfect for climbing with no wind, a million stars but cold – about 20 degrees F at the start. For 6 hours the group moved in the dark up the side of the mountain using only headlamps. The climb is not technical but the oxygen level keeps dropping and the climbing is hard because of the steep crater wall. Every climber digs deep looking for the last bit of energy to keep going. For many, there is a pounding headache due to the altitude.

Finally, at about 6 AM, just as the sun started to come up, the group was able to reach the summit at Gilman’s Pt, the lowest part of the crater rim. All of the hikers that set out from Kibo Hut made it to the summit, quite an accomplishment considering the average summit rate of 65-70%. The temperature at the summit was 5 degrees F and for many their water was

starting to freeze in their packs. The sun rise was spectacular and for all but two (who headed back down at that point) the journey continued on to Uhuru Peak, the highest part of the crater, and another two hour hike along the rim. There, for just a minute, in the fullness of the sunrise, each climber got to stand as the highest human in Africa at 19,341 ft – oxygen level at 40% of sea level. 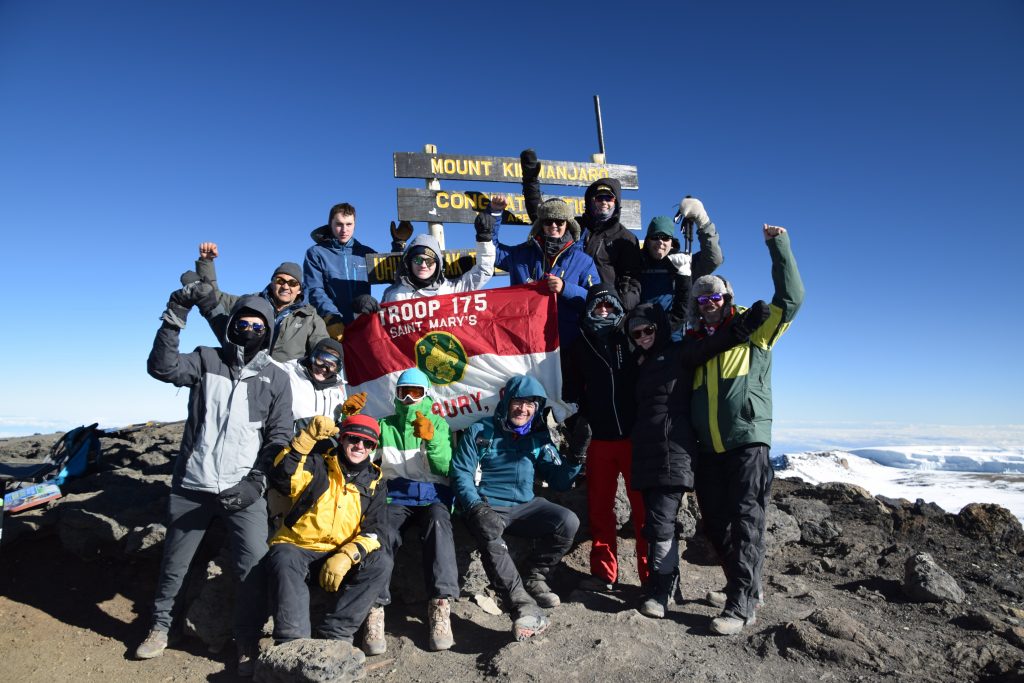 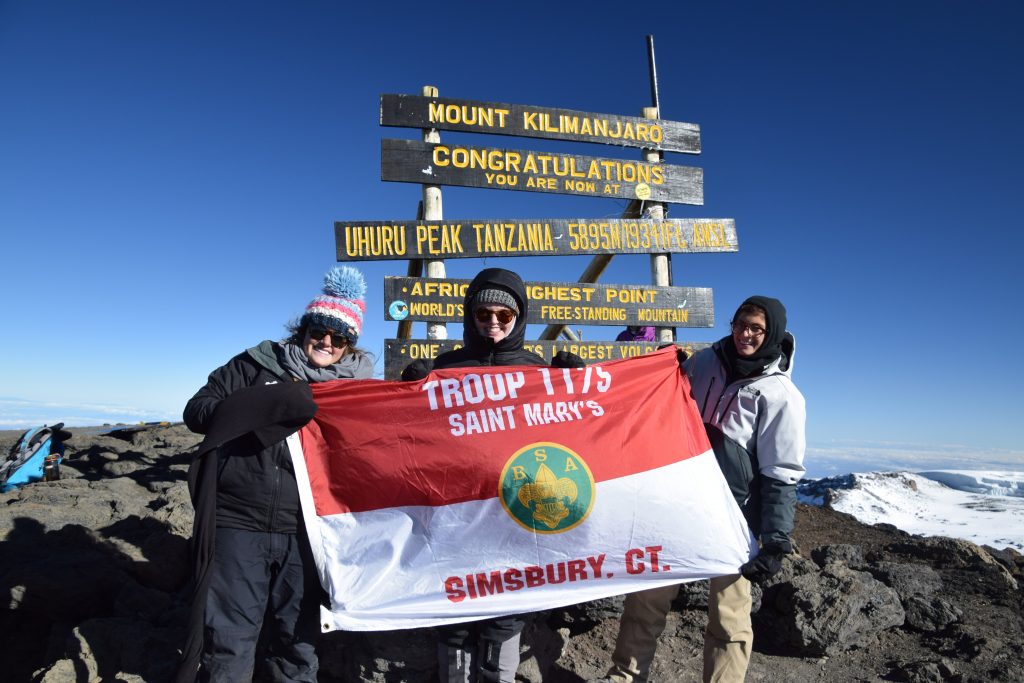 The Head Guide, Charles, made sure that none of the climbers were suffering from either High Altitude Pulmonary and/or Cerebral Edema – life threatening conditions that come with lack of oxygen. Oxygen bottles were available if necessary, but not used. Nonetheless, Charles made it clear that 15 minutes at the summit was all that he would allow in order to avoid these issues and the group was sent back down to Kibo Hut, arriving about 11 AM that morning. The day was not done. After a light lunch and 30 minute rest, the climbers were required to hike an additional 4 hours down to 12,000 ft and Horombo hut for the night, arriving about 4 PM. For many, it would be the longest day of their lives.

The next day, the group hiked out the final 11.5 miles to the main Marangu Gate and back to the hotel for much needed showers and rest. The following morning the group began a 5 day safari that took them from Lake Manyara National Park, to the Ngorongoro Crater and on to the Serengeti. They even stopped for a paleontology lecture at Olduvai Gorge, where the Leaky family unearthed the oldest evidence of human evolution in the 1930s. Finally, on August 9, all headed back to Nairobi Airport for the 15 hour flight back to JFK.

“We run these types of trips every summer for our older scouts. We have taken them deep into the Amazon Jungle, sailing down the Belize Reef, exploring through Thailand, Rafting down the Zambezi River (Zambia Africa), SCUBA diving in Honduras, sailing through the Greek islands, and even a cultural expedition in Cuba,” said Scoutmaster Mead. “Properly prepared, teenagers can do extraordinary things. The Scouting BSA program provides those opportunities.”

Scout Troop 175 is looking for boys between the ages of 10-18 with sense of adventure and fun to join us. The troop draws scouts from the entire Farmington Valley. They meet on Thursday nights from 7-8:30 PM during the school year and welcome interested boys to stop in and see what it is all about. For more information contact Scoutmaster Brad Mead at 860-614-1484 or bradmead@deltanow.com