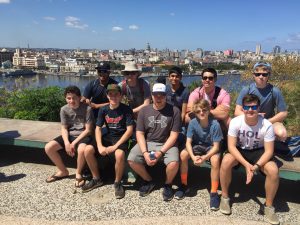 On April 8th, nineteen Boy Scouts and adult Scouters from Simsbury’s Boy Scout Troop 175 became the first American Scout Troop to visit Cuba in fifty-seven years. The Troop was granted special visas by the US State Department which allowed them to legally visit and exchange cultural experiences with the local Cuban people.

Scouting was very popular in Cuba prior to the Castro Revolution in 1959. It has not been allowed since the Revolution. Simsbury Troop 175 took the first steps to help re-introduce Scouting into Cuba by making contact with members of the Pioneer Explorers, a Cuban organization that is the most like Scouting. 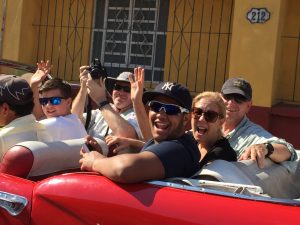 The Scouts arrived in Havana by airplane and spent two days touring the capital and learning about the history of Cuba – in particular Fidel Castro and his revolution. “Our tour guide was a former member of the Cuban Foreign Service Corp and introduced us to many of the government institutions and museums in Havana,” explained Scoutmaster Brad Mead.

The Scouts were able to see Revolutionary Square, the house where Ernest Hemingway lived and also the small village where he lived and fished while writing “The Old Man and the Sea”. They also toured The Museum of the Revolution which displayed the remains of wings from downed U-2 spy planes as well as captured American tanks from the failed Bay of Pigs Invasion. “History is written by the winners – it was interesting to see their perspective on the Bay of Pigs invasion,” said Lori Boyko, Committee Chair for the troop. 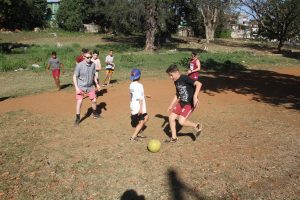 In many of the Havana city squares, local Cuban boys were playing soccer. The Scouts were always invited to join in. “Our guys did well but the Cuban kids were really good. It was fun to play pick up soccer in the middle of a town square,” said Max Hollister, a Patrol Leader in the troop.

After two days in Havana the Troop then boarded a Cuban local bus and traveled for six hours to the city of Cienfuegos, a maritime community near where the Bay of Pigs invasion occurred on the southern coast of Cuba. There they chartered two large catamarans to sail into the island chain off of Cuba to see some of the more remote areas of the country. Prior to boat departure the Scouts had to purchase all the provisions for the five days of sailing in the local grocery stores. With the assistance of Armando Vargas, Assistant Scoutmaster and a native Spanish speaker, the Troop was able to negotiate for fruits, vegetables and other resources from the local vendors in the town. Many of the scouts also spoke some Spanish and used it extensively while provisioning the boats. The availability and variety of foods was very restricted because the Cuban economy does not provide more than the minimum in amount and selection. 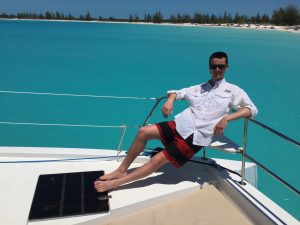 The sailboat charter company provided local Cuban captains for the boats, who gave the scouts insights into life in Cuba while taking the group to the outer islands to see the spectacular beaches and wildlife. “Our captain David took all the scouts with snorkel gear and showed us how to retrieve lobsters from the reef. In two hours we brought in twenty large lobsters and over eleven fish by spear fishing. It was amazing to barbecue them that night and have a big Lobster bake on the boats.” said Eagle Scout Alex Stine, Senior Patrol Leader (Lead Scout) for the troop. 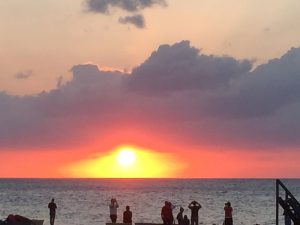 The Captains also spent time teaching the boys to sail and navigate through the islands. Often sting rays and sharks would swim along the boats and in the reef areas many barracuda were sighted.

Each night the boats would anchor behind a reef or in a local marina. In one of the villages the group had an opportunity to participate in a festival that was happening that night. The captains gave lessons in Latin dancing until the wee hours of the morning.

At the end of the week the boats returned to the Cienfuegos marina and the troop boarded vans to Havana airport for the flight home. “The Cuban people were incredibly fun – full of life and music. They were great to meet and very welcoming to our scouts,” said Life Scout and Assistant Senior Patrol Leader Charlie Brinegar.

“This was a great trip,” said Scoutmaster Mead, “and the beginning of what we hope will be an introduction of Scouting back into Cuba. We take our scouts on international trips every year so they can experience a world outside of Simsbury. This summer we will take thirty of our Troop to Phuket, Thailand to explore the coast and the islands of Thailand. In 2019 we are scheduled to return to climb Kilimanjaro for the third time. We previously held climbs in 2007 and 2012. We already have twenty five people who have expressed interest in the trip, even though it is more than two years away. Other prior excursion included rafting the Zambezi River, exploring deep into the Amazon, sailing through the Greek island, as well as climbing and rafting in the Alaskan wilderness. We are a different type of Scout Troop and offer some truly unique experiences.”

You can see photos from the trip in the Troop 175 Photo Library.